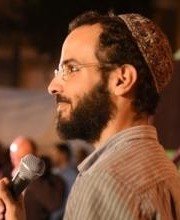 Tom Fogel was born in 1986 in Yahud, a small town east of Tel Aviv. Today I live with my wife Berenika and our son Tuvia in Givat Yearim close to Jerusalem. He studied Botany and Ecology for 6 years in The Faculty of Agriculture at The Hebrew University campus in Rehovot, and wrote his Master thesis on forest regeneration in Israel. In this field he has worked in some of the leading institutions in Israel – the forest department of the JNF, the INPA (Israel Nature and Parks Authority), The National Herbarium in Jerusalem and The Jerusalem Botanical Gardens, where he worked as curator.
While finishing his MA studies, Tom decided to devote his research interest and energies to Folklore studies, a field in which he has always been interested. he began the process in 2013, studying Arabic and theoretical and methodological aspects of Folklore studies, and two years later was accepted as a PhD student.

Tom's thesis deals with the Yemenite research of Shelomo Dov Goitein – one of the known researchers of the Hebrew University at its early days, and a pioneer in the study of the Jews of Yemen, along with his more famous Geniza studies. Alongside his current research and cataloging in the Goitein Archive at the National Library, he also works at the Goitein Archive in Ben-Zvi Institute in Jerusalem, where he catalogs the materials Goitein had left there after moving to the U.S. This archive contains a vast amount of Folklore materials: folksongs in Yemenite Arabic, proverbs and tales, and equally important, pieces of evidence to Goitein's way of work, correspondences with his informants and research assistances etc. Together with his main work, Tom deal with other fields of research regarding Yemenite culture, such as music and jewellery (both he also practices as a hobby).