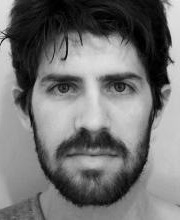 Yodan Fleitman is a graduate of the MA Urban Design program in Bezalel Academy of Arts and Design. Archaeologist in profession and an MA student in the department of archaeology at the Hebrew University. Former editor of David's Palace stratigraphy in its late periods. Published the ceramics assemblage of Ha'ophel excavations near the Temple Mount, offering updated typology to the Roman-Byzantine period pottery typology in Jerusalem and its environs. Today works as a field administrator in Horbat Midras archaeology site, and on the publication of the stratigraphy of Ramat Hanadiv excavations. He also works in the archives of the National Library on architectural material behalf of the 'Land Marks' project, and on the Reichman Kahane collection at the Geography Department at the Hebrew University as part of the project Traces and Treasures of German-Jewish History.