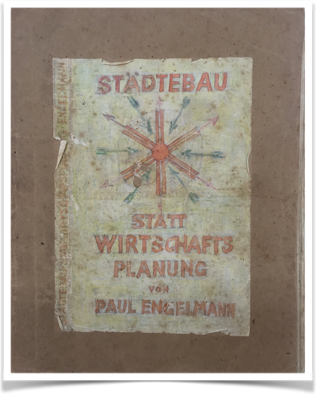 Collections of architects and planners include holdings from various settings. The Historical Archives of the University of Jerusalem hold the collections of German-Jewish planners Ariel Kahane (Berlin 1907-Jerusalem 1986) and Shalom Reichman (Warms 1935- Jerusalem 1992). Ariel Kahane was a senior state planner during early statehood, who played a key role in shaping the Israeli New Towns programme. Professor Shalom Reichman, a Professor of Geography at the Hebrew University, was a pioneer of Israeli geography and planning.

The archive at the Architecture Department of the Technion holds collections of German-Jewish architects and planners Paul Engelmann (Olomouc 1891 - Tel Aviv 1965), Gedalyau Wilbushevitz (Grodno 1865 - Palestine 1943) and Max Lev (Loeb) (Kassel 1901 - Haifa 1962). Paul Engelmann, arguably Adolf Loos’ closest pupil, was educated in Vienna and close to modernist circles, including Ludwig Wittgenstein and Karl Kraus. His small, yet incredibly rich, archive at the Technion is evidence of his close apprenticeship with Adolf Loos and his attempts to promote Loos’ legacy in Palestine after emigration in 1934. Wilbushevitz received his education at the TU Berlin-Charlottenburg and after emigration planned major public landmarks in the city of Haifa. The drafts, sketches and personal documents of Max Lev (Loeb) document his careers in Darmstadt, Cologne and then in Haifa. Largely, these collection further illuminate the contribution of German-Jewish modernist architects and planners to early nation building efforts in the fields of architecture, town and country planning.