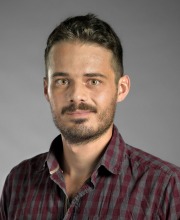 Adrian Paukstat has studied English, history and political science at the university of Augsburg. He currently works at the department of political theory at the university of Augsburg, where he teaches undergraduate and graduate students and writes his dissertation under the supervision of Professor Marcus Llanque. He has published on political Islam and neo-right-wing movements in Germany and his first book on the concept of statehood in the political theories of Michel Foucault and Nicos Poulantzas is currently being prepared for publication.

Adrians dissertation project deals with the reception of messianic thought in modern political philosophy. It aims at a broad intellectual history of messianic strands of thought in progressive political theologies, relating messianic ideas to utopian political thought and the idea of human emancipation. The German-Jewish tradition of thinkers such as Gershom Scholem, Franz Rosenzweig and Martin Buber is hereby understood as a point of departure, which, specifically in its criticism of and engagement with the legacy of German Idealism, provides a key influence reaching from Frankfurt school critical theory, the political messianism of Jacques Derrida, on to the recent debates of a re-reading of the letters of Paul, specifically so, in the political philosophies of Alain Badiou and Slavoj Žižek. The project aims to show how these highly diverse receptions of messianic traditions can be understood as constituting different positionings within the conceptual field of tension constituted by the basic contradictions of messianic discourse, these being: transcendence/immanence, universalism/particularism and activism/quietism. Furthermore, it attempts to show in which respects all of these debates constitute an examination of the possibility of a post-metaphysical conception of social totality in the form of a continuing engagement with the legacy of German idealism in its various forms.