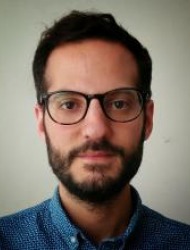 Amit Levy is a postdoctoral fellow in the George L. Mosse Program in History (University of Wisconsin–Madison & Hebrew University of Jerusalem). As a cultural and intellectual historian, he is interested in the ways migrating knowledge affects transnational and inter-cultural encounters, especially in imperial and colonial contexts. In his PhD project (Department of History, HUJI, where he also completed his MA studies), entitled A New Orient: German-Jewish Oriental Studies in Palestine/Israel, 1926–1963, Amit studied the migration of Orientalist knowledge from German universities to Palestine/Israel and the encounter of Arabic and Islamic Studies scholars with the Orient. He is now developing a new project which will explore encounters of migrating and local knowledge in British Mandate Jerusalem, starting with the British-Arab-Jewish initiative of the Palestine Folk Museum (1936-1948).

Since 2019 Amit also serves as the managing editor of the FRMRC's Naharaim: Journal of German-Jewish Literature and Cultural History.

He was the research coordinator of the joint project of the FRMRC, DLA Marbach and the Leibniz Institute for Jewish History and Culture – Simon Dubnow, Traces and Treasures of German-Jewish History in Israel.

- (co-authored with Hanan Harif) “‘A Complete, Multifaceted Discipline’: The Debate over the History of Jews in Muslim Lands and its Teaching at the Institute of Jewish Studies and the School of Oriental Studies, 1948–1955,” in: Uzi Revhun and Yfaat Weiss (eds.), The History of the Hebrew University of Jerusalem, 5th volume (accepted; forthcoming) [IN HEBREW].

- "'The Sheik': Understanding American Orientalism through Visual and Narrative Differences in Three Decades of Discussion,” Slil 10 (Winter 2016), pp. 39-57. [IN HEBREW]