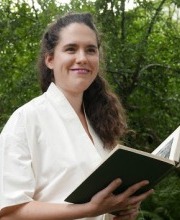 Anna Holzer-Kawałko is a PhD candidate at the Department of History of the Jewish People and Contemporary Jewry at the Hebrew University of Jerusalem. She earned her bachelor’s degree at the University of Warsaw (2012), and completed her master’s degree (summa cum laude) at the Hebrew University in Jerusalem (2015). Currently, under the supervision of Prof. Yfaat Weiss, she is working on her doctoral dissertation, which deals with German-­Jewish book collections and nation­-building in Czechoslovakia between 1918 and 1948. Between 2016 and 2020 she was a fellow of the Baroness Ariane de Rothschild Doctoral Program and a doctoral research fellow with the project “The Historical Archives of the Hebrew University. German-Jewish Knowledge and Cultural Transfer (1918–1948),” funded by the Gerda Henkel Foundation. Alongside her studies in Israel, she has spent time over the past few years as a visiting scholar at the Deutsches Literaturarchiv in Marbach, the Leibniz Institute for Jewish History and Culture - Simon Dubnow in Leipzig and the Freie Universität in Berlin. Her research interests include Jewish cultural property after 1945, heritage and migration studies, Central and Eastern European borderlands in the 20th century, and historical study of material culture.

My project examines the history of book collections that belonged to the German-speaking Jewish communities in Czechoslovakia. The origins of the collections reach the second half of the XIX century when the first Jewish research institutions and communal libraries devoted to collecting, preservation and study of Jewish cultural artifacts were established in the realm of the Austro-Hungarian Empire. The project explores the fate of this heritage in the Czechoslovak state, once it emerged from the First World War in 1918. It illuminates the specifc conditions in which the German-Jewish book collections unfolded in the course of three turbulent decades in the history of Czechoslovakia: from the First Czechoslovak Republic, through the Nazi occupation to the immediate post-war years, when Czechoslovakia was re-established as an ethnically homogenous nation-state. A special focus is given on various nation-building processes that created the socio-political context in which the collections were first accumulated and further developed only to be eventually destroyed and distributed all over the world. The thesis adopts a dual perspective and presents both the practices employed by the members of the Jewish community to build and advance their book collections as well as the policies of assimilation, accommodation, and exclusion used by the Czechoslovak (and in the period of 1939-1945 – Nazi) authorities to manage the cultural heritage of the Jewish minority. Finally, it points to some international initiatives that shaped the fate of these book collections after the Second World War.