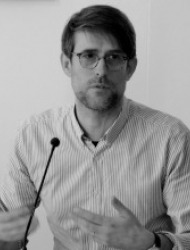 Arndt Engelhardt is a cultural historian and has been working at the Leibniz Institute for Jewish History and Culture (DI), Leipzig, as a Research Associate since 2006. He studied History (Medieval and Modern), General and Comparative Literature, Germanics at Leipzig University and the University of Coimbra, Portugal (2000/2001). He received his Ph.D. at the University of Leipzig in 2011 with a dissertation, under the direction of Prof. Dan Diner (Jerusalem/Leipzig), on the nineteenth and twentieth century network of European scholarship and Jewish encyclopedias. It was published as “Arsenale jüdischen Wissens. Zur Entstehungsgeschichte der ‘Encyclopaedia Judaica’” in 2014 by Vandenhoeck & Ruprecht, Göttingen. His current research on the transformation of publishing and reading in Jewish culture in the age of emancipation is placed in the context of broader trends in European intellectual history. During his stay at the Hebrew University in Jerusalem he is also a member of the working group “Cultural Agency, Transnational innovation, and Publishing Economics: The Romm Printing House and the European Republic of Letters.”

My research project “Public Emancipation and Literary Belonging: On the Materiality of German-Language Jewish Publishing Cultures in the Nineteenth Century” reconstructs the material and cultural dimensions of the German-language Jewish book trade in the emancipatory age. Printing and the book trade became increasingly important spheres of activity after the Napoleonic wars, including for Jews, as these fields demanded commercial skills and entrepreneurial daring as well as a broad intellectual horizon. These professions moreover lay beyond academic limitations and therefore offered special opportunities to Jewish scholars and businesspeople who were filled with nineteenth-century ideals of emancipation, acculturation, and individualization, but were not able to acquire university positions.

This project, which focuses on both literary and scholarly works, investigates the European and transnational orientation of primarily German-language Jewish publishing houses as well as more generally the bourgeois culture of reading emerging at the time, which formed a prerequisite for the publishing business. The project examines these primary research interests on the basis of three sub-projects connected to Leipzig as a trade fair, book, und university city. The first concerns the professional activities of the publisher Moritz Veit (1808–1864) in the Börsenverein der Deutschen Buchhändler (the German Publishers’ and Booksellers’ Association, founded in Leipzig in 1825) as well as his close connections to the literary culture of the pre-1848 era and the milieu of the Science of Judaism. The second sub-project will examine the program and long-term impact of the Institut zur Förderung der israelitischen Literatur (the Institute for the Promotion of Jewish Literature), a literary association with 3,000 subscribers that was based in Leipzig from 1855 to 1873 but which has been widely forgotten by posterity. The third sub-project will focus on the Judaica and Orientalia productions of the Leipzig publisher F. A. Brockhaus, one of the most formative universal publishers in Germany in the second half of the nineteenth century.