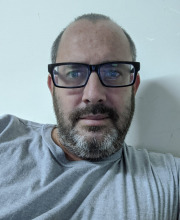 Asaf Ziderman has recently completed his PhD studies at the School of Philosophy, Tel Aviv University and submitted his dissertation titled “On Action and Dialogue: Martin Buber’s Dialogism as a Philosophy of Action.” He is currently working on a manuscript for a book on that subject to be published by a university press. Asaf is a Library Fellow at the Van Leer Institute, Jerusalem, and teaches philosophy and Jewish philosophy at Ein-Pratt and Natur’s gap-year programs.

Asaf completed with honors his BA and MA studies at the Tel Aviv University, and submitted an MA thesis titled “On Religious Action: Paradigms of Religious Praxis in 20th-Century Jewish Thought”. During his PhD studies Asaf received various fellowships and awards, including a three-year stipend from the Posen foundation, and a one-year Fox Fellowship at Yale University.

There is a broad consensus in today’s post-Wittgensteinian philosophy, one may call it the neo-Pragmatic framework, which is centered around two core ideas. The first is the primacy of thought over action. The second is the centrality  of inter-subjectivity in the constitution of the agent. As I showed in my dissertation, Buber’s philosophy deals not only with intersubjectivity, but also extensively with the concept of agency. Moreover, it points to their intimate interrelation. As such, Buber’s dialogism can serve neo-Pragmatism as an important and refreshing source of insight.

In the current project I intend to chart Buber’s potential contribution to the neo-Pragmatist framework on two cardinal issues. First, Buber stresses that inter-subjectivity is possible only through a second person mode of address. Neo-Pragmatists, however, speak of inter-subjectivity in general and tend to ignore second-person-ness. Second, neo-Pragmatism tends to hold that all knowledge is conceptual through and through, so one cannot know what one cannot express in language. Such an extreme position, however, creates a set of problems, such as understanding the possibility of knowledge by infants, the process of language acquisition, the possibility of translation, and the phenomenon of insight. I intend to argue that these problems can be solved, and indeed do not arise, if we are willing to assume, together with Buber, a conceptual space—albeit a very thin one—between language and knowledge.