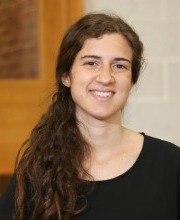 Ghila Amati is a PhD candidate at the University of Oxford in the Department of Theology and Religion. Her doctoral supervisors are Dr Miri Freud-Kandel and Prof Johannes Zachhuber. Ghila’s research project – under the title: Lebensphilosophie in Rabbi Avraham Itzhak HaCohen Kook’s Thought – is set within the field of Modern Jewish philosophy and examines the philosophy of Rabbi Abraham Isaac Kook within the contextual framework of the 19th century German ‘philosophy of life’ (Lebensphilosophie) movement. Founded in Germany, the major exponents of Lebensphilosophie include Wilhelm Dilthey (1833-1911), Friedrich Nietzsche (1844- 1900), and Georg Simmel (1858-1918), though the Frenchman Henri Bergson (1859-1941) is also considered one of the movement’s central figures.

In her research project, Ghila argues that many aspects of Rav Kook’s theological-political works consist in a religious re-interpretation and translation of ideas – such us life-affirmation, nature’s vitality, irrationality, intuition, and history's constant ascent – popular among this German secular philosophical current. By uncovering Rabbi Kook’s connection to the German ‘philosophy of life’, her research will shed new light on the German philosophical foundations of Kook’s theology in particular, and of the Zionist Religious and political movement in general, of which Rav Kook is considered the founder.

During her doctoral studies and in support of her research, Ghila has been awarded an Open-Oxford-Cambridge AHRC Full Studentship and was appointed as a research fellow at the ‘Judaism and Human Rights Program,’ at the Israel Democracy Institute.