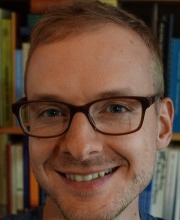 Johannes Czakai is a PhD candidate at Free University Berlin and a fellow at the Franz Rosenzweig Minerva Research Center. He studied History and Jewish Studies in Berlin, Potsdam, and Kraków and graduated in 2013. After working as a freelance archival researcher, he was Research Assistant at the Selma Stern Center for Jewish Studies Berlin-Brandenburg (ZJS) from 2015 through 2018. Aside from his PhD project, his main research interests are German- and Polish-Jewish history, early modern history, Jewish cemeteries and epigraphy, genealogy and art.

Starting point of Johannes’s PhD thesis is the notorious adoption of permanent, German family names by the Jews of Austrian Galicia and Bukovina – names like Ringelblum (marigold), Streisand (grit), or Affengesicht (monkey face). This step did not simply take place in 1787, as often stated, but was a multifaceted process with several goals and several, partially contradictory steps. In analyzing the implications of this process, he is able to shed new light onto Habsburg imperial rule in newly annexed Galicia. Accordingly, his work examines the adoption of permanent names in the context of governmental surveillance techniques. Moreover, because of the German appearance of the newly adopted names, the process is often portrayed as means of a forced ‘Germanization’. In scrutinizing this blurry term, Johannes analyzes the process from the perspective of Austrian Enlightenment and the discourse on Yiddish. His final focus is Jewish agency. By asking if these names were chosen or assigned, he questions the outdated depiction of Galician Jews as helpless victims of anti-Semitic clerks. Based on newly found archival material from Austria, Poland, Ukraine and Israel, he paints a colorful picture of Jewish life in Galicia at the end of the 18th century.