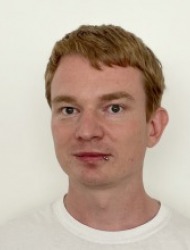 Lars Tittmar is a doctoral fellow at the Franz Rosenzweig Minerva Research Center for German-Jewish Literature and Cultural History for the year 2022/23. His research focusses on Critical Theory (especially Theodor W. Adorno and Walter Benjamin), social philosophy and the correlation between utopian thinking, aesthetics and the philosophy of history. He also published articles about Jean Améry.

He studied philosophy and sociology in Hamburg and Berlin. After graduating from Humboldt-Universität zu Berlin he was a doctoral researcher at the Selma Stern Zentrum für jüdische Studien Berlin-Brandenburg and Freie Universität Berlin. He is currently working on his PhD-project in philosophy.

Since the discussions in the circle around Max Horkheimer in the 1930s there is an infamous connection between utopian thinking and the prohibition of image.  That says it seems not possible, to say from the present view how this utopian world looks in the detail. One reason is that this mentally anticipation would be caught in ideas of the present, which at least is the one to leave behind. This work is based on the necessity of adhering to the concept of utopia, if a critical theory of the present does not want to lose sight of utopian thought. The problem of the loss of utopian consciousness is regarded as topical. Against this background, the problem of the prohibition of images appears as an unsolved problem of a materialistic, dialectically oriented philosophy, which as a practical ultimately aims at the realization of the utopia of a liberated society.

What this project wants to show is the importance of the utopian idea as a main topic or core of the critical theory of Bloch, Benjamin and Adorno. In the relation to the prohibition of image a combination of epistemological problems, theological terms and aesthetics in combination with a materialistic philosophy of history builds the conceptual frame of this project. The preliminary thesis is that there is a connection between utopia and the prohibition of images in the form of a dialectical movement.

In The Dialectics of Enlightenment Horkheimer and Adorno claim the right of the picture could only be rescued under the absolute realization of its ban. That's why this work puts a special focus on the aesthetic reflections of Bloch, Benjamin and Adorno, cause here the strains, consequences and maybe solutions between the expression of Utopian desires on the one hand and the necessity of the ban of images on the other comes to light.