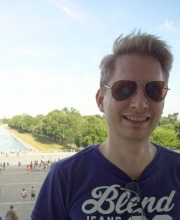 Níels Eggerz is a PhD-Candidate at the Hebrew University of Jerusalem (since October 2013) and a fellow at the Franz Rosenzweig Minerva Research Center (since October 2015). Besides this he is also part of the ERC research project Theologies of Conversion in Early Modern East Central Europe, headed by his advisor Pawel Maciejko. He studied Ancient History, Modern History, and Judaic Studies at the Ludwig Maximilian University of Munich (LMU) and graduated in 2013 with a thesis on the Luzzatto-Controversy and Jewish Modernity.

My research project deals with the life and works of Johan Kemper (1670-1716). Kemper was Sabbatean rabbi, who converted to Protestant Christianity. Later he went to Sweden were he dedicated his life to proving the main tenets of Christianity from the Zohar. The project is devoted to the research of Jewish-Christian intellectual exchange in the late seventeenth and the early eighteenth century as facilitated by Christian Hebraist, Christian Kabbalists, Sabbatean Jews, and converts to Christianity. It thus combines different branches of intellectual history and aims at enhancing our understanding of Jewish-Christian interchange in the Early Modern Period made possible to great extent by persons with intermingled identities such as Kemper. It attempts to show that the border separating Christianity and Judaism was far more blurry and permeable in Early Modern Europe than generally assumed by analyzing one of the foremost examples of Jewish-Christian interchange of ideas in Europe in the late seventeenth and the early eighteenth century.