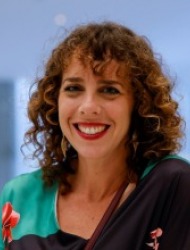 Noa Avron Barak is the Olga and William Lakritz post-doctoral fellow at the Franz Rosenzweig Minerva Research Center for German-Jewish Literature and Cultural History. Her academic focus lies on the intersection of art history and theory, gender and German Jewish thought, particularly the relevence of Martin Buber’s dialogical philosophy for art history. Using Israeli art  history as a case study, she wishes to articulate a paradigm shift in how twentieth-century feminist art practice is historically interpreted and evaluated. Avron Barak wrote her doctoral dissertation in Ben Gurion University (2022) titled Fictional Canons: History, Fiction and Authority in Israeli Art Literature, where she offered a new  literary-based theoretical framework for canonization mechanism in Israeli art.   Two article based on her dissertation are forthcoming this year: “Jewish Art on Jewish Land? Martin Buber’s Conception of Adama Yehudit in his Speech in the Fifth Zionist Congress, 1901” in Chidushim: New Findings in the Research of German and European Jewry (Leo Baeck Institute, Jerusalem) and “Fictional Canon – Reconsidering Karl Schwarz Modern Jewish Art, 1941” in Imagined Israel(s): Projections of the Jewish State in the Arts, editors Luna Goldberg & Rocco Giansante (Brill: Jewish Identities in a Changing World series).

My project for the Lakrtiz Fellowship seeks to articulate a paradigm shift in how twentieth-century feminist art practice is historically interpreted and evaluated utilizing the aesthetic thought of Martin Buber. The project develops two fields of inquiry in conjunction with one another. The first is Martin Buber’s Dialogical Philosophy and the wider intellectual and cultural existentialism in which it was embedded. This philosophical current saw interpersonal relations as the essence of being as such and thus also the essence of art. Buber and his contemporaries' work shaped how art—including feminist art—was conceived in the first half of the twentieth century. Under their influence, artists understood and practiced art as a social endeavor. Although art historians and critics abandoned this intellectual trajectory after World War Two, it has reemerged in the last two decades, which have seen dialogue become a key concept in art practice and criticism. The second is feminist art history, which I propose to rethink through the prism of dialogical philosophy. Although many feminist thinkers have already embraced the idea that art is fundamentally dialogical, this conception is intellectually rooted in individualist notions of art creation. To escape this underlying individualist paradigm, this project set out to establish an alternative, Buberian basis for dialogical approaches to feminist art and to articulate its potential for art history writing. In so doing, it places practices of producing, viewing, and participating in art in the sphere created between human beings and sets out to evaluate artworks’ historical significance through this prism.

To exemplify and articulate the stakes of the paradigm shift toward intersubjectivity, this project attends to case studies of collaborative feminist art practice. The particular bond between Buber’s dialogical philosophy and Israeli culture has led me to analyze instances from Israel/Palestine.  My case studies are the following: The New Bezalel weaving department, Feminist photography, Ahoti (“my sister”) for Women in Israel. By attending to collaborative feminist art from Israel, I mean to rewrite feminist art history by way of its underrepresented trajectories around the globe, of which Israel is one key example. I do this not just to rediscover neglected practices, but to redefine what feminist art practice is and means.