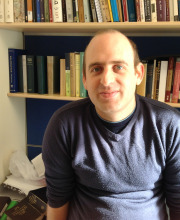 Roy Amir is a postdoctoral fellow at the Franz Rosenzweig Minerva Research Center for
German-Jewish Literature and Cultural History at the Hebrew University. His research
focuses on Kantian and Neo-Kantian philosophy, specifically on Herman Cohen. Before
joining the Franz Rosenzweig Center, he was a PhD fellow at the Department of
Philosophy at Potsdam University. His research was supported by the Mandel School for
Advanced Studies in the Humanities at the Hebrew University, the Minerva Foundation
and the ISF research project &quot;Theocracy and Perfectionism in Modern Jewish
Philosophy,&quot; led by prof. Benjamin Pollock. His dissertation, completed at the Hebrew
University, analyzes the notion of rationality in Cohen&#39;s System of Philosophy.

The notion of political theology – a kind of metaphysical-hermeneutical paradigm – plays
a dominant role in current philosophical and theological discourses. In my postdoc
project, I approach this paradigm from the critical point of view of one of its fiercest
adversaries, Hermann Cohen's Neo-Kantian notion of rationality. The project, titled
Religion, Politics, Reason and the Possibility of a Political Theology in the Philosophy of
Herman Cohen, is both historical and philosophical. First, contra to a popular approach to
Cohen's philosophy of religion as a source for a rational (i.e., ethical) political theology, I
stress Cohen&#39;s critique of the very rationality of political theology as such, which he takes
to be a form of political materialism. This materialism, for Cohen, is amoral and has
devastating consequences for politics as well as for theology. I show that Cohen&#39;s critique
is derived directly from his systematical grounding of rationality, specifically from the
conditions of possibility of moral thinking and its actualization. Finally, based on Cohen&#39;s
critique, I consider the possible political meaning of Cohen's theology and offer possible
philosophical principles for a rational approach to the relation between theology and
politics.