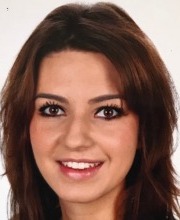 Sabrina Habel studied philosophy, sociology and modern German literature in Tübingen (summa cum laude). She worked as a Junior assistant at the Swiss Federal Institute of Technology (ETH) Zürich (at Prof. Andreas Kilcher’s chair for Literary and Cultural Studies), as a research and teaching assistant at the German Department of the University of Zürich (Prod. Wolfram Groddeck) and as ab academic collaborator  at the “Cultural Foundations of Integration” Center of Excellence at the University of Konstanz. Her project focuses on the German and jewish playwright Carl Sternheim and his „poetics of the social“. In her free time she is an editor at the Swiss online-magazine „History of the Present“ (https://geschichtedergegenwart.ch)

The research project investigates the comedies of the German-Jewish author Carl Sternheim (1878 -1942), in particular the comedy „Die Hose“, which lies at the center of Sternheim's work and marks the beginning of a series of sociological comedies. Sternheim's comedies about several generations of the family "Maske" reflect the social structures in the Germany of Wilhelm II and the interwar period and depict the turn of the educated middle classes to fascism. The comedies provide complex and critical readings of the political, economic and libidinal structures of German society. In Sternheim’s "poetics of the social" the antagonisms of the social are reflected in the figure of the individual - the so-called "bourgeois hero". For Sternheim, the individual is where the social (theatrically) takes place: the individual incorporates social contradictions, his identity is fragile, a question of armor, self-discipline and power. Sternheim shows the ambivalences and contradictions of his characters as reflexes of social inclusions and exclusions. His plays explore the possibilities for action and development of the bourgeois (and Jewish) individual. They question the possibility of social advancement through assimilation and education, and ask what significance the humanist educational ideal as represented in the German educational canon still has after the World War and in the face of rising fascism. Behind the emancipation of the citizen through his education Sternheim shows anti-Semitism, machistic "male fantasies", and a cold and ruthless society that deforms rather than shapes its characters. The problematization of education from a German-Jewish perspective is a fundamental aspect of Sternheim's social and individual dramaturgy. The comedies are storages of contemporary knowledge, paradigms of modern drama and radical proof of its crisis.