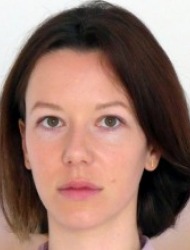 Sarah Stoll is a postdoctoral fellow at the Franz Rosenzweig Minerva Research Center for German-Jewish Literature and Cultural History. Her research focusses on undiscovered areas in Kafka’s œuvre. She also published articles on Paul Klee, Paul Celan, and Theodor W. Adorno. Before joining the Franz Rosenzweig Research Center she was a Ph.D.-Fellow of the Minerva Foundation at the Department of Comparative Literature at Tel Aviv University. Her research also has been supported by the Elite Network of Bavaria when she held a research position at the University of Munich and when she was a visiting researcher at the Institute for Israel and Jewish Studies at Columbia University in New York. Her dissertation, which is currently transformed into a book manuscript, investigates Franz Kafkaʼs dramatic writings, which are, to this day, essentially unknown in the reception literature. The focus is on Kafka’s until now little heeded play The Grave Watcher, which occupies a special place in Kafka’s work as his only extended attempt at a drama, and on Kafkaʼs dramatic dialogues, which are identified in the dissertation as a distinct complex of Kafkaʼs writing. From there Kafkaʼs relation to the theater is reconsidered. Aspects of this research have been published for example in the periodical of the German Kafka-Society.

Kafkaʼs Poems – This combination of the authorʼs name with this genre may surprise, since, hearing the name Franz Kafka, one rather thinks of three great, if also fragmented novels, as well as of some longer and some shorter stories. For this stubbornly persisting focus, Max Brodʼs editing practice alone cannot be held responsible since an international team of researchers edited and published the complete critical Kafka edition at Fischer publishing house between 1982 and 2004. However, at least three areas of Kafkaʼs writing remain largely unstudied to this day: The recently edited volume Franz Kafka – The Drawings (Andreas Kilcher, C. H. Beck München 2021) comprises two hundred drawings by Kafka and portrays Kafka as a draftsman. My dissertation Narrowest Stages. Destroyed Presents – Franz Kafka Between Epic and Drama portrays Kafka as a dramatist, and lastly this project aims to portray Kafka as a poet. Kafka, the cartoonist; Kafka, the dramatist; Kafka, the poet; all these combinations of author name and genre sound strange to our ears, though all of them are reasonable.

Kafka wrote fivty two shorter texts which must be considered poems in the narrower sense. They often rhyme, they are mostly structured through rhythm and meter, they appear in verses and stanzas, and they evoke strong images. To this day, apart from a short entry in the two Kafka handbooks (Metzler and Kröner [Hartmut Binder]), there is no research on Kafkaʼs poems. Kafkaʼs poems are not accessible as a collection. Dispersed in Kafkaʼs Quarto- and Octavo-Notebooks, in letters and in his posthumous fragments, they had to be searched for and systematically identified  in order to establish a lyrical corpus, one worthy of investigation in its own right. In the course of the project, Kafkaʼs poems shall be analyzed, published and translated into English. Furthermore, the question shall be put, which position Kafkaʼs poems hold within Kafkaʼs œuvre. On the one hand they appear to a great extent as an independent achievement, on the other hand they are connected to Kafkaʼs stories, novels, dramoletts, and drawings, be it through common motifs, be it through specific linguistic structures which reveal Kafkaʼs singular movements of thinking.