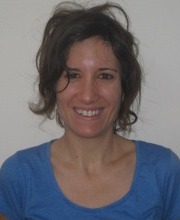 Postdoctoral Fellow
The Historical Archive of the Hebrew University

Shira Wilkof specializes in the history and theory of modern spatial knowledge – planning, urbanism, geography, and environmental thought, with a particular interest in professional transnationalism.  In her dissertation, which she recently completed at UC Berkeley, she examined the emergence of Zionist planning, as a distinct locus of German knowledge transfer, placing it as an encounter between Central European planning traditions, British colonial practices and the Zionist ideology. This study provides a first history of the field of planning in Jewish Palestine/Israel.

At the Rosenzweig center, she will continue to explore mid-twentieth century German intellectual migration by focusing on how environmental-scientific attitudes travelled to the Palestine/Israel, adapted to the local nation-building project, and later were exported by Israeli experts of German background to the postwar “developing” world. Based on the rich holdings of the Historical Archives at the Hebrew University, her research challenges perceived notions of the direct flow of knowledge from Germany to the West, demonstrating instead how Palestine/Israel became a key locus of knowledge production in this process.

Another long-lasting project in which Shira is engaged is the production of urban space in East Jerusalem in the context of a contested city. Based on her MA research, which examined the intersections between spatial professionalism and nationalism in the making of post-1967 Jerusalem, she continues to explore the city’s complex planning realities and their impact on urban communities.

Dr. Wilkof holds a B.A. degree in History and Geography at The Hebrew University of Jerusalem; an M.Sc. in Urban and Regional Planning at The Technion – Israel Institute of Technology; and a Ph.D. in History of Architecture and Urbanism at UC Berkeley.