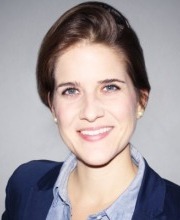 Teresa Walch received a BA in History & German in 2010 from the College of Saint Benedict in Minnesota. She volunteered at the Dachau Concentration Camp Memorial Site between 2011–12 with the organization “Action Reconciliation Service for Peace.” Thereafter, she began graduate studies in Modern European History at the University of California San Diego, receiving her MA in 2015 and her PhD in 2018 (with minors in Urban History & Global History). Her dissertation was entitled Degenerate Spaces: The Coordination of Space in Nazi Germany, for which she was awarded the “Dryden Hull/John Marino Best Dissertation Prize” for 2017–18 by UC San Diego’s History faculty.

Her research has been supported by multiple institutions, including the German Academic Exchange Service (DAAD), the Fulbright Program, the Fritz Thyssen Foundation, and the German Historical Institute. Walch has presented on her work at conferences and workshops in the United States, Israel, Germany, England, and France. Walch’s research interests include: modern Germany, Holocaust history, urban history, Jewish history, politics of memory, transnational and global history, and human geography.

Walch’s current research investigates the links between ideology and space in Nazi Germany. Recent studies have examined how conceptions of Lebensraum (living space) in Nazi Germany propelled World War II and the Holocaust as German authorities endeavored to clear Central and Eastern Europe of its Jewish and Slavic communities and prepare the landscape for German settlers. Walch shifts the focus from German-occupied Europe to 1930s Germany to illuminate the spatial practices that preceded and undergirded wartime policies of spatial cleansing. Maintaining that “Blood and Soil” ideology constituted a dynamic organizing principle for life in Nazi Germany, she argues that Nazism itself should be understood as a spatial project that sought to make Germany judenrein (clean of Jews). Antisemitic notions of a “jewified Germany” immediately and forcefully inspired efforts from 1933 onward to cleanse German spaces of Jews and Jewish influences—instigating property confiscations, policies of segregation, urban renewal projects, and the erasure of traces of Jews from the built environment. Bridging the divides between intellectual, cultural, and social history and drawing from urban theory and human geography, Walch outlines how, when, where, and in what ways Nazi ideology became praxis in everyday life via legislation, systematic measures, and individual actions.