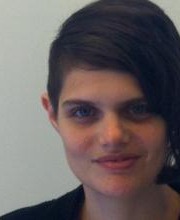 Yael Levi is a doctoral student at the Hebrew University of Jerusalem, in the Department of History of the Jewish People and Contemporary Jewry. She is writing her dissertation on the transition of the Hebrew Alphabet (Aleph-Beis) from Eastern Europe to the United States in the 19 th  century. Yael received an MA in Yiddish Literature from Tel Aviv University, Department of Literature. The Thesis Topic was “Jewish Press in the United States, 1913–1918: Hebrew, Yiddish and English – Connections and Interactions”. Grants and scholarships include Dinur Scholarship from The Dinur Center for Research in Jewish History (2016); The annual Nadav peoplehood award, NADAV Foundation (2015); Dov Sadan Prize for Research in Hebrew Language, Hebrew Literature, and Yiddish Literature (2015); the Goldreich Family Institute Fellowship, Tel Aviv University (2014—2015).

The current project deals with the transition of the Hebrew Alphabet from Eastern Europe to the United States in the 19th century. The research explores how Jewish immigrants brought multilingual traditions of their culture – writing in Hebrew and Yiddish – from Eastern Europe to America. My research will examine the means in which Jewish immigrants established their linguistic heritage and unique culture while acclimatizing in the new world: the difficulties they encountered; their stated and implied goals in the cultural project they undertook; and the implementations of their aspirations. These questions stand at the crossroads of modern Jewish culture and human rights, and they relate to the politics of recognition and to the debate over identity politics.

“-A True Trip: The Significance of Walking in Sholem Aleichemʼs Stories for Children”, Sholem Aleichem 1916-2016: Writing Place, The Hebrew University of Jerusalem, May 2016.