The systematic destruction of European Jewish culture during World War II by devastation, spoliation and looting attained dimensions unknown in history. The plundering of European cultural property reverberated throughout World War II and its aftermath. In the post-war years the policy towards the restitution of Jewish cultural property was discussed and disputed among various Jewish bodies and the institutions of the victorious Allies. It brought to surface tensions and disagreements over the Jewish past, the memory of the victims, and the link between the devastation of the European Jewry and the founding of the State of Israel.

In the last decade 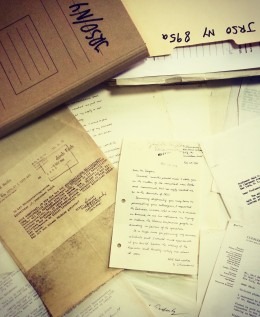 there has been a growing interest among historians concerning the political, ideological and juridical aspects of cultural property restitutions. In addition, as a result of the objectives of the 1998 Washington Conference “Principles on Nazi-Confiscated Art”, many archives, museums and other relating institutions in Europe and in the United States have decided to set up repositories of information on Nazi-confiscated cultural property and its redistribution following World War II. These repositories often offer online descriptions of archival records and, in many cases, digital images of the records that relate to cultural property and restitution.

The contribution of these initiatives to historical research is inestimable. However, the lack of a similar repository presenting Israeli documents relating to the issue, and the sometimes poor condition of these documents, has made it difficult for researchers to conduct a thorough investigation of the subject.

The project is a cooperation between The Rosenzweig Minerva Research Center, The Archive of the Hebrew University of Jerusalem, The Central Archives for the History of the Jewish People (CAHJP), and the National Library of Israel.

The main goal of the project is to locate, list and preserve documents relating to the restitution of cultural property after 1945 and to make all such records publicly accessible.

The project is supported by I-Core/ Da‘at Hamakom Center. It aims to enable accessibility and visibility of the variety of sources located in the Israeli archives, setting the ground for a more comprehensive and profound research.