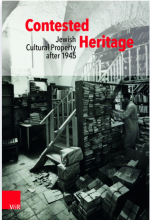 Contested Heritage: Jewish Cultural Property after 1945" addresses the political and cultural implications of robbery and displacement of the Jewish cultural property during the Second World War. The volume includes seventeen essays, accompanied by newly discovered archival material and illustrations, which address a wide range of topics: from the shifting meaning and character of the objects themselves, the so-called object biographies, their restitution processes after 1945, conflicting ideas about their appropriate location, political interests in their preservation, actors and networks involved in salvage operations, to questions of intellectual and cultural transfer processes revolving around the moving objects and their literary resonances. Thus, it offers a fascinating insight into lesser-known dimensions of the aftermath of the Holocaust and the history of Jews in postwar Europe.

The volume originates from the Minerva Gentner Symposium Contested German-Jewish Cultural Property after 1945. The Sacred and the Profane that was held in Jerusalem, on September 27-29, 2016, in the framework of research cooperation between the Rosenzweig Minerva Research Center (the Hebrew University of Jerusalem), the Deutsches Literaturarchiv Marbach and the Simon Dubnow Institute for Jewish History and Culture in Leipzig.