The Franz Rosenzweig Minerva Center promotes the publication of original and groundbreaking works in the field of German-Jewish studies. The two main platforms in which fellows and young scholars can publish the results of their research are the Naharaim journal and Makom book series.

Makom is a book series published by Fink Verlag (Paderborn). The name ‘Makom’ is the Hebrew term for ‘place’ or ‘space’, but it also designates God, whose spatial presence is affirmed yet at the same time questioned. Makom hosts studies by the Center's affiliated researches, concentrating on modern German-Jewish literature and philosophy. 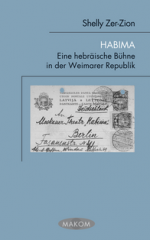