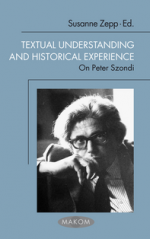 This volume addresses the nexus between historical experience and philological understanding in the writings of the literary scholar Peter Szondi (1929–1971).
Surveying the breadth and depth of Szondi’s theoretical interests, the volume weaves a comprehensive portrait of this unique thinker. His contribution to the field of Comparative Literature was significant, and in some cases groundbreaking. Bringing together articles by historians, literary scholars and cultural historians, this volume portrays Peter Szondi’s thinking about literature, thereby conveying a sense of the scope and significance of his intellectual interests and achievements, while not neglecting the aspect of biographical and chronological coherence. Peter Szondi’s life and work is presented as intricately intertwined with the philosophical, political, and historical context of the 20th century.