“There is a need for a native quality Arabic speaker”: Isaac Shamosh, the First Oriental Lecturer in the School of Oriental Studies"

Since its foundation in 1926, the School of Oriental Studies aspired to hire an Arab-Muslim lecturer to its ranks, for various reasons, both political and professional. The strongest professional justification was to expose the students to a living form of Arabic, directly from a native Arabic speaker. The purpose was to train students of the institute in conversational skills, as well as in proper, stylish writing. Another purpose was to provide students familiarity with the contemporary Arabic literature. This aspiration was difficult to realize: The university was the intellectual representation of Zionism, and it wasn't easy to find a capable Arabic speaker, Palestinian or other, who would accept an invitation to become a lecturer at the University; moreover, the orientalists of the institute, most of whom were educated in German universities, insisted that the lecturer would have a western academic orientation, a requirement that significantly limited the possible applicants for the position.

The years past, regional safety deteriorated, and the political rivalries between Jews and Arabs in Palestine worsened – but the need for a native Arabic lecturer didn't diminish. It often seemed as though the students wanted the lecturer more than the professors of the institute – as we can learn from a letter that was sent to the Executive Committee of the University in October 1936: “In various occasions the University administration has emphasized, that besides its [the University's] scientific objective, the University is also committed to serve the vital needs of the Yeshuv [Jewish settlement from the beginning of the twentieth century] and those of the Zionist movement in general, and hence there lies an important obligation on our Institute in our national reality.” The purpose of the institute, they claimed, was to “train teachers and scholars”, but also to “train people with a wide oriental education for a job in the civil service, for public office, journalism, etc.” In the letter (that was signed by “all the student of the institute except one”), the students demanded of the university to teach “Arabic language, both classical and modern, and as much as possible also the local colloquial dialect. Despite the need, today there are only rigorous studies of the classical language. It is unacceptable that after four years of studying in the institute the alumni won’t be able to write an article or even a letter in plain Arabic or to converse with an Arab”. In order to fulfill those goals the university needs “to expand the studies in modern Arabic by hiring a new lecturer who is a native Arabic speaker.”

As a result of the pressure from the students and from additional actors, the School of Oriental Studies started looking for a native Arabic speaker who would serve as a lecturer for “practical Arabic” (aravit shimushit), namely, basic conversation and writings skills. Because of the political realities at the time and safety issues – a few months before the 1936 Arab revolt broke, and one of the lecturers at the institute, Levi Billing, was murdered in his room – it became clear that a Jewish native Arabic speaker was needed, and it was possible that there would arise the need to settle on the demand for a western academic orientation.

The institute’s Director, Leo Aryeh Mayer, explained in a meeting of the Standing Committee early on 1937 that "There is a need for a native quality Arabic speaker", a good lecturer. There is no need for him to be a scientific professional in that particular area.” It was decided first to hire two lecturers for a trial period, but following the recommendation of one of the Workers’ party [Mapai] persons, the Oriental expert and journalist Michael Assaf, it was decided that only one lecturer would be hired, Isaac Shamosh (1912The Jewish Agency—1968). Shamosh was born in the Jewish community of Aleppo, Syria, where he lived when he received the invitation. From a very young age, Shamosh was active in the Jewish community and published multiple articles on various subjects in Arabic newspapers. He studied law and was certified as practicing lawyer in Saint Joseph University in Beirut. During his studies, he worked as a teacher in north Syria. He continued his studies in the department for Arabic language and literature at the Syrian University in Damascus, and in 1932 his essay about classical and new Arabic literature won a literary competition that was conducted by the journal “Al-Hadith”. The Jewish community wanted to assign him as its candidate for the Syrian parliament, but his application was rejected due to his young age at the time. 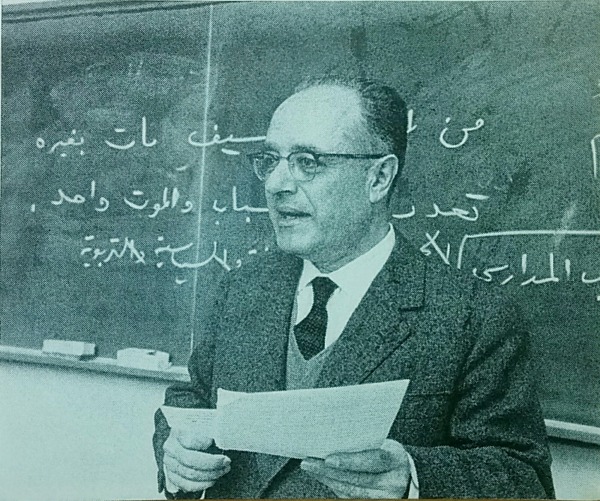 In his personal file in the Hebrew University archive we were able to trail the correspondence that took place before his arrival: He was invited for a trial period of two months, between April and June 1937, and it was explained to him that his position would be to “conduct lessons in spoken Arabic language both for beginners and advanced students, especially daily speech, as is common amongst the educated Arabs in their lectures in their universities, radio shows, etc. (the sessions were supposed to take place for two hours a week).” He was also asked “to supervise over the writing of assignments and correction of the students’ style for four hours a week.” To the invitation letter, that also included details regarding conditions of his employment and the salary that he was to receive, he replied in the affirmative in Arabic – perhaps to demonstrate his skills.

The trial months were successful, and it was decided to employ him from the beginning of the academic year 1937—1938 as a lecturer for practical Arabic in the academic preparatory program. The acting director back then, Shelomo Dov Goitein, emphasized that in order for the students to get familiarized with the Arabic language, “we established that Mr. Shamosh will lecture one hour a week about some matter from the modern Arabic literature in Arabic. It is not an academical study.” Due to his new position, Shamosh was granted an immigration certificate and left Aleppo along with his mother and younger brother Amnon (later a writer and a poet, a member of the Ma’ayan Baruch Kibbutz). 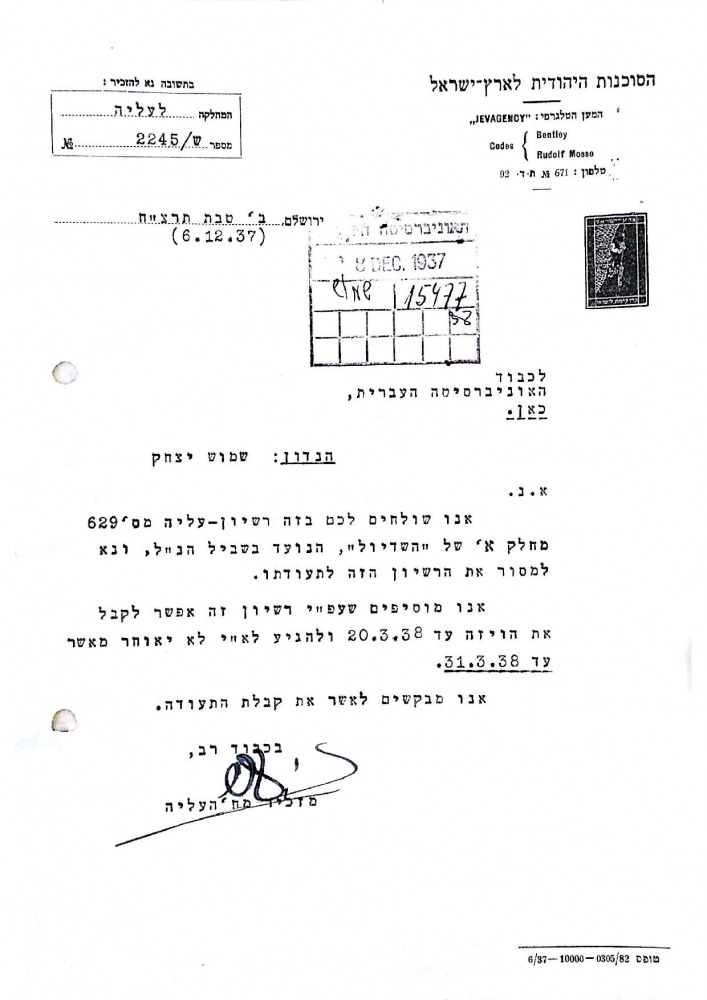 The employment of Issac Shamosh was a corner stone in the chronicles of the School of Oriental Studies: He was the first academic member of the institute who was not of a European descent, but an oriental who was raised in an Islamic country (the second who was not born in Europe was Yosef Yoel Rivlin, born in Jerusalem to an Ashkenazi family). But his employment was significant for another reason: The scope of his position in the University was not enough to make a living for him and his family, and so already during the preparations for his immigration to Palestine it was agreed that parallel to his work at the University he will grant the Political Department of the Jewish Agency various services – mostly translation – that were assigned to him due to his mastery over both Hebrew and Arabic. That was the first time that this kind of recorded, declared cooperation between the institute and the Zionist establishment took place. The nature of the cooperation was new: a professional from the Institute served for the first time at the political, intelligence and propaganda needs of the Zionist establishment. The essence of the cooperation becomes even more important if we consider that during that period a few of the institute’s intellectuals, from German-Jewish decent, criticized core conventions of the Zionist establishment, and were affiliated with left-wing political groups, such as bi-nationalist “Brit Shalom”.

With time, the initial arrangement turned out to be inefficient: the Political Department didn’t have enough work for Shamosh for him to make a sufficient living, although it was clarified to the university that “In as much as there is a need for publishing articles and propaganda pamphlets aimed for the Arab public, the Political Department will try to make use of the services of Mr. Shamosh.”; The university, on the other hand, refused for years to give Shamosh a sufficient raise or to expand his teaching positions, despite urgent protests from the directors and senior members of the School of Oriental Studies. Even after he finished his doctoral dissertation within the institute, his salary still was too small to support him and his family. He never achieved a higher position in the institute, even though many of his colleges and even students achieved higher positions with the passing of the years. Shamosh had no choice but to find other sources of income, and so he was the head of the Arabic newscast of the “Voice of Jerusalem” for a short period and was in charge on the editing of the Arabic register at the Ministry of Law.

In the School of Oriental Studies, that in 1962 became the Institute for Asian and African Studies, Shamosh continued to teach until his death in early 1968. 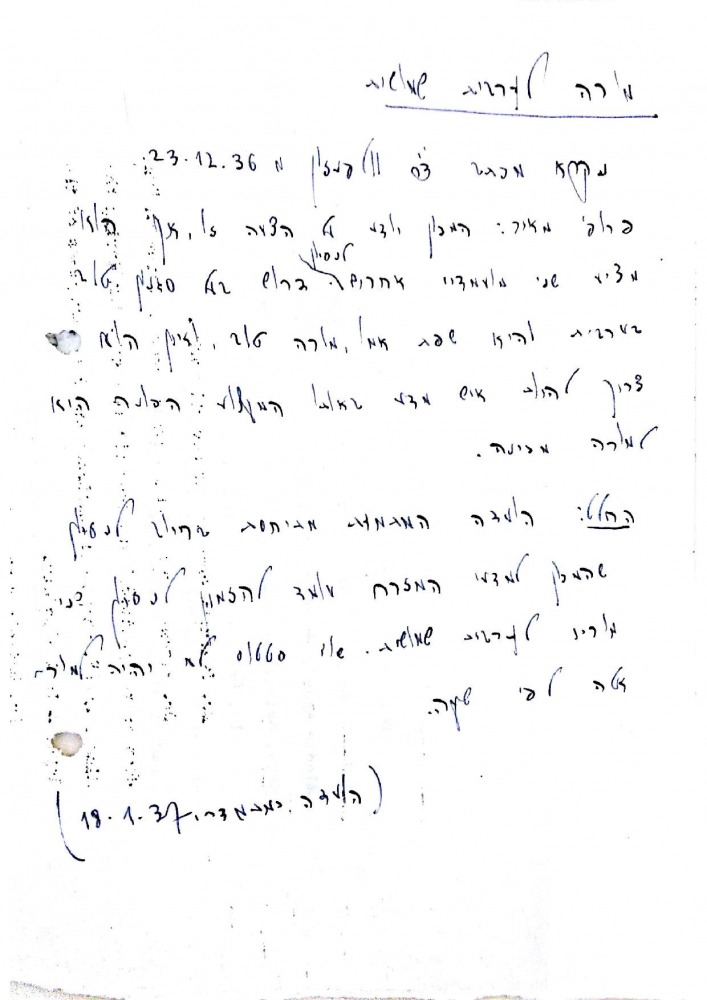 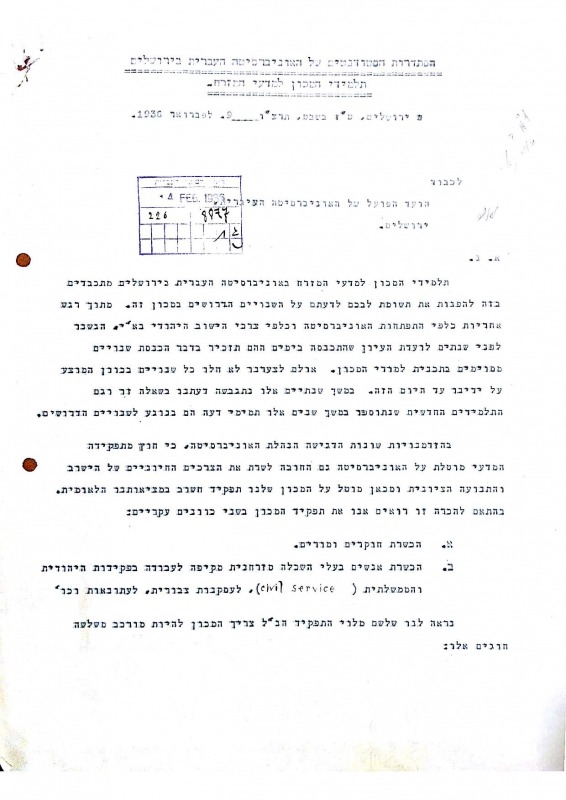 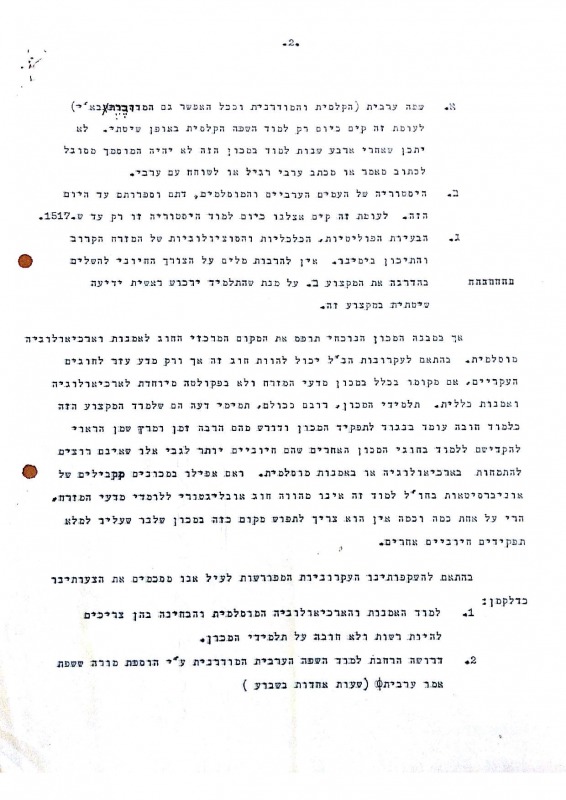 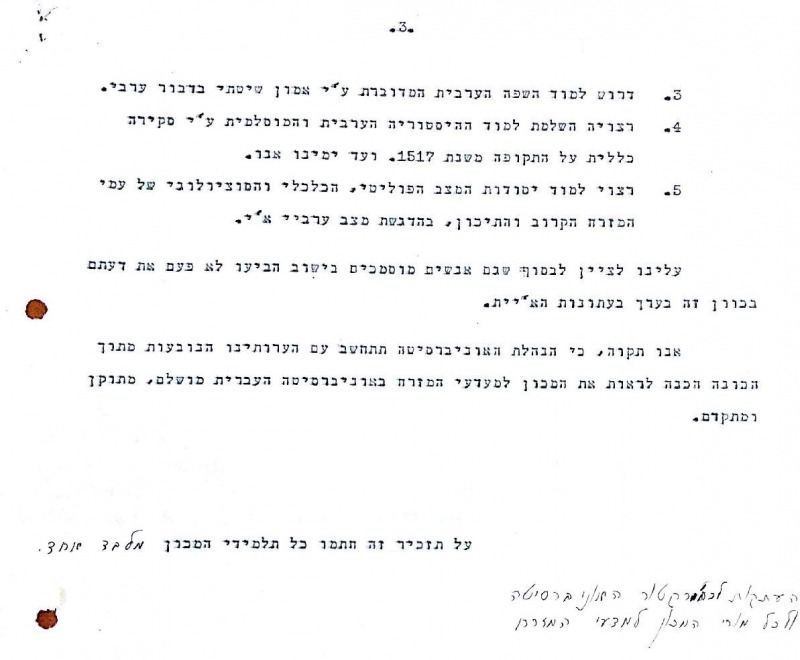 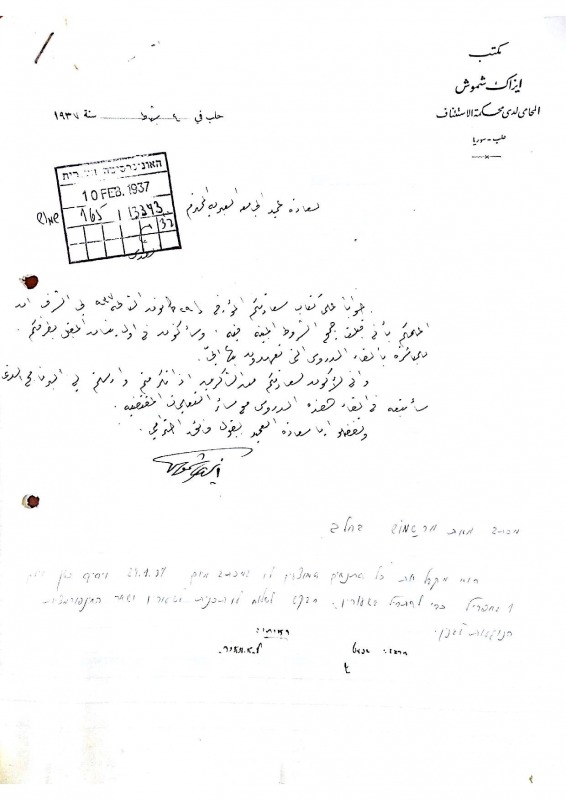 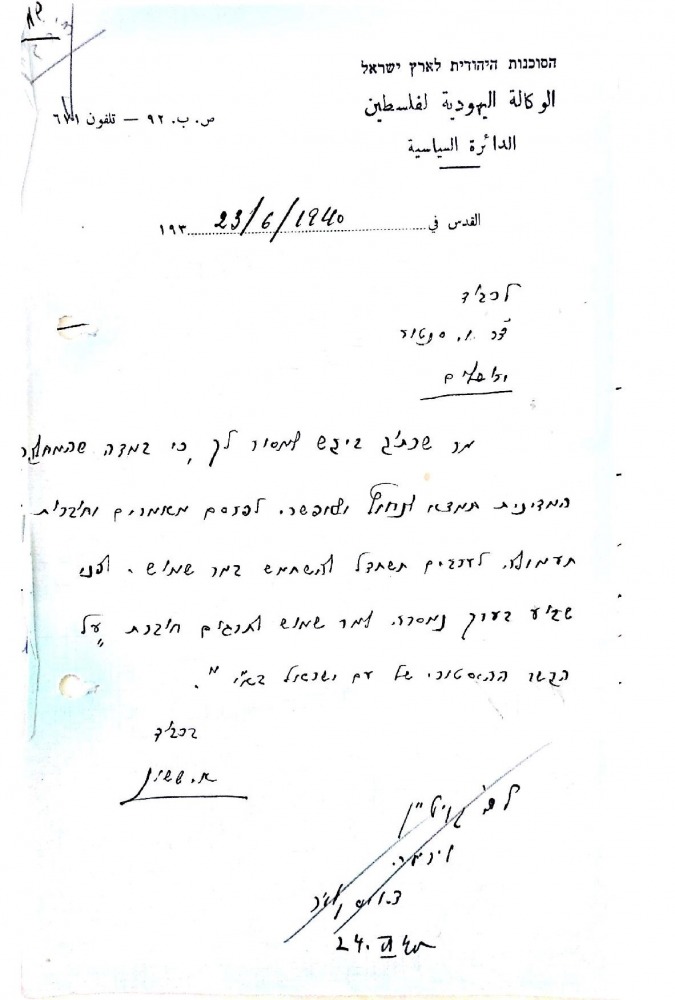